I’ve always been told I am an old soul, but I think that’s mostly because I act like an eighty-year old. By that I mean, the five-year old kids I babysit understand iPads better than I do and I just learned that “B.O.B” doesn’t mean, “bring own beer.”  If selfies, global warming, and YOLO haven’t already made you lose faith in humanity, maybe these phrases will… #theendisnigh.

The only time I’ve ever heard this before it being everyday terminology was in that one song where the lyrics went: “Ey bay bay!” And I just thought that was a fun way to say “baby.” As it turns out, this isn’t even a shortened version for the goddess and savior Beyonce, but it’s actually an acronym for “Before Anyone Else.”

Use it in a sentence: “My six second attention span causes me to become tired of actually pronouncing the word ‘baby’ so I’m just gonna shorten it to ‘bae.’ Kay, boo?”

This is another word that isn’t just some drunken slur of the tongue, and it’s no misspelling of “Thor.” It actually means “That Ho Over There,” just another colorful (and pretty annoying) way to dress up calling a woman promiscuous or overly sexual.

Use it in a sentence: “Ugh, look at THOT over there, with her cheetah patterned leggings and Marc Jacobs plastic knockoff. Like, no.”

Youths typically say this phrase when something is just so overwhelming that they just can’t even seem to find the words express their disbelief. This phrase is sometimes described as “the last words of a dying white girl” because the utter shock sometimes causes them to “literally die.” Others may die from holding their breath, waiting for the person speaking to finish their sentence. “Can’t even… what?”

Use it in a sentence: “Bro, my mom forgot to buy more Hot Pockets. I am literally dying of starvation. I like, can’t even, right now. Come on man, where are my Hot Pockets?”

Here we have an abbreviated version of the phrase “one hundred percent.” This term is often used when a person is expressing their excitement or certainty about something, whether it is an invitation, an event or a job well done.

Use it in a sentence: “Hilary Swank has got the cutest face in Hollywood, hundo p!”

This is another popular term used by teens and music artists to describe getting totally messed up. It can also apply to parties, ragers and crazy concerts where the crowd gets “turned up” due to the excitement and manic nature of the event.

Use it in a sentence: “Josh got so turnt at the club last night that he ended up streaking through a Taco Bell drive through and vomiting up Dorito nachos until 3 in the morning.” 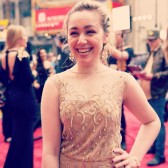